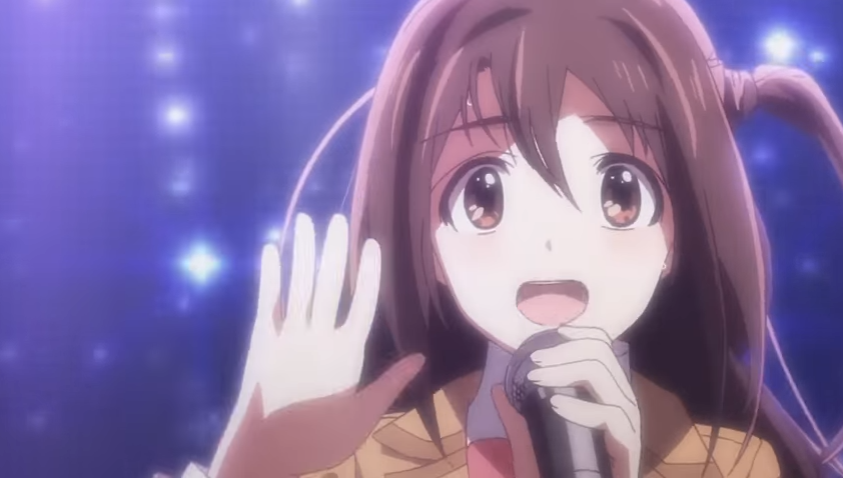 Previously, we looked at the Fall 2013 season of anime and the history of Kyoto Animation.

Whereas Kyoto Animation is known for it’s in-house production practices, A-1 Pictures is known for being the exact opposite: its productions are comprised nearly entirely of freelancers. Their website itself only lists producers, CG directors, composite directors, and color designers on its staff page. However, the nature of hiring freelancers is still dependent on relationships, and the A-1 rolodex calls on the same names regularly.

A-1 Pictures has also served as a small locus of opportunities for women to direct anime series, including Kotomi Deai, Yumi Kamakura, and former Kyoto Animation staff Noriko Takao. Miyuki Kuroki is also set to co-direct The Idolm@ster Side M anime in the fall. Women have also been hired to direct films with Takao’s Saint Young Men and Shoko Nakamura’s Doukyuusei. Additionally, a number of women have been hired to work as assistant directors on a number of TV series, theoretically preparing them to helm a series on their own (a list that includes Kuroki and Deai). While A-1 Pictures has a relatively extreme (and potentially varied) production model with its nearly pure freelance hiring, the studios has been comparatively willing to hire on more women to direct its projects. 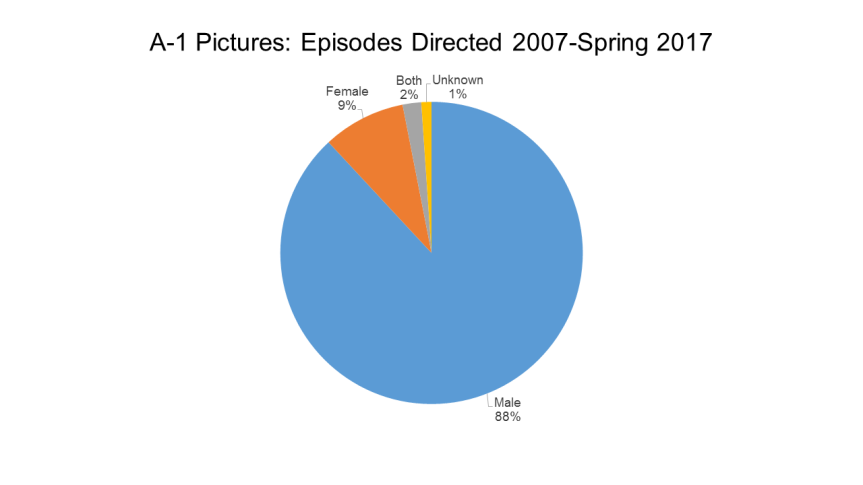 In 1,560 episodes of TV anime¹ between 2007 and the Spring 2017 season, including OVAs, just 11% of episodes at A-1 Pictures projects were direct by women. This is effectively the same through its history as the Fall 2013 season and half that of Kyoto Animation’s history. 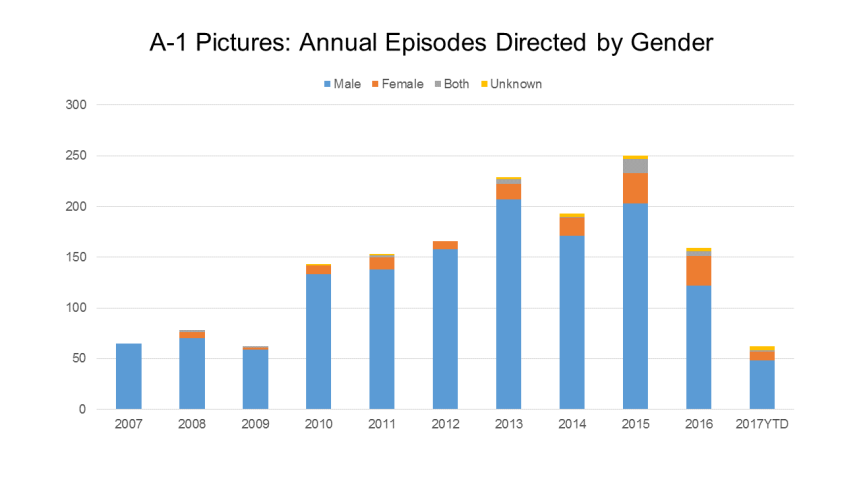 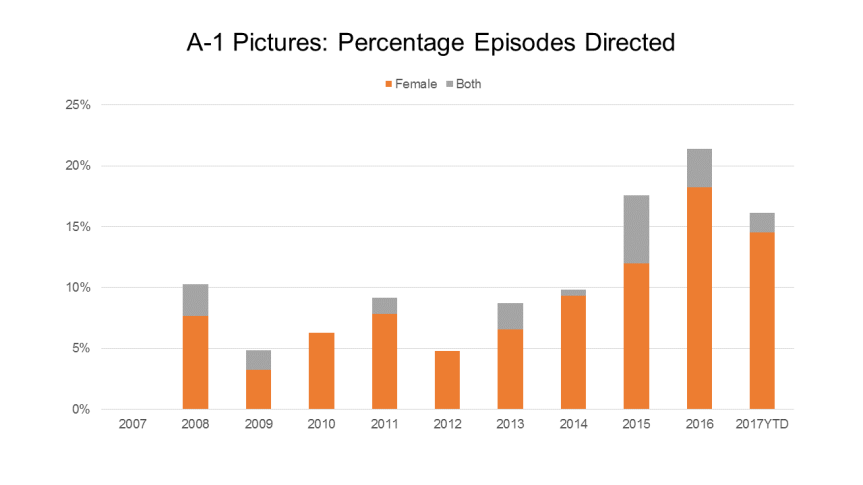 Matching with the historical trend of the industry overall, the number of episodes of anime produced by A-1 Pictures say a significant increase since the end of the Great Recession. However, it also saw an increase in the proportion of episodes directed by women, particularly since 2015, topping out at over 20 percent in 2016.

Across all A-1 Pictures productions, the series with the greatest proportion of episodes directed by women by far was The Perfect Insider, the only series with a majority of episodes directed by women, with a staff list that includes Miyuki Kuroki, Yukiko Imai, Akiko Seki, Yoshiko Mikami, Ayaka Kouno, and Ayako Kurata. The other series near the top of this list projects more recent in the studio’s history – 2016’s UtaPri season, the second cour of the Cinderella Girls anime, WWW.WORKING!!, Ace Attorney, Silver Spoon, Your Lie in April, and Granblue Fantasy – anime that represent a variety of genres and demographics.

When a woman is the chief director of an anime, the number of episodes directed by women at A-1 Pictures increases significantly. However, there are only three directors included in that list: Kotomi Deai, Noriko Takao, and Yumi Kamakura. The series are limited to the second season of Silver Spoon, the split-cour The Idolm@ster Cinderella Girls, the third season of Working!!! and the spin-off WWW.WORKING!! Additionally, all of these series also aired in 2014 or later, correlating with the studio’s recent increase in hiring of women to serve as episode directors.

Of all the female directors hired by A-1 Pictures, only Yumi Kamakura is near the top of this list. As the director of The Perfect Insider, Mamoru Kanbe tops the list followed by Takeshi Furuta, the director of the 2016 UtaPri series. Kamakura comes in third, and as a series director, also directs a number of episodes herself. Noriko Takao is just outside the top ten, while Kotomi Deai is in the middle.

Among the most active enshutsu at A-1 Pictures is Yukiko Imai, with 12 episodes directed by herself or in tandem over the time period. Ayako Kurata, who was tagged as anime series director for Granblue Fantasy and longtime director Harume Kosaka coming in second with 11. Unsurprisingly, recently tagged series directors Yumi Kamakura, Noriko Takao, and Kotomi Deai also join this list. Also of note is Korean director Pyeon-Gang Ho who handled six episodes for A-1 Pictures. Overall just eight episodes were led by Korean directors.

A-1 Pictures has improved its hiring practice over the past three years, both for series directors and episode directors, though it is still well below parity. But overall, and despite a vastly different business model, they’ve caught up to Kyoto Animation in terms of overall hiring practices for enshutsu. Despite these gains, A-1 Pictures still lists only one female producer on their webpage, Narumi Kabe (Anthem of the Heart, Erased, and Interviews with Monster Girls). Hopefully they continue their current trends in hiring.