Anime Tamago will hold a screening in Ikebukuro of this year’s four new shorts to train young animators this March. Historically, a majority of the animators trained by this project have been women, though most of the upper level staff are men. This year’s projects are:

Once again in 2018 the majority of the young animators are women, nearly 71%, 17 of 24. This year, two of those women are Chinese¹, both working on Midnight Crazy Trail. 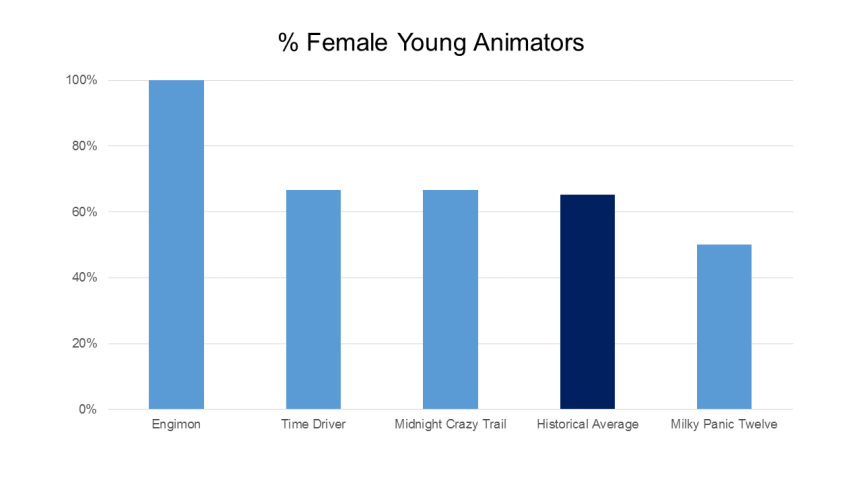 Each project had six young animators on the team, and one to three senior animators. Engimon joins 2015’s Happy ComeCome and 2016’s Utopia as a project will all female young animators. Yuri Yoshida worked on that project in am assistant producer role, while Tomomi Kikawada was the only female character designer among the four projects.

The historical average of female young animators (in its short 8 year history) now hovers around 65%. While Milky Panic Twelve had the lowest promotion of women, it 50%, not a noticeably lower number.

Akiko Isobe was the only female lead producer, working with Ryosuke Mamiya and Tomoya Iwasawa on Time Driver. The other three projects all had women in assistant producer roles: Yoshida on Engimon, Shou Suzuki on Milky Panic Twelve, Mio Horiai on Midnight Crazy Trail.