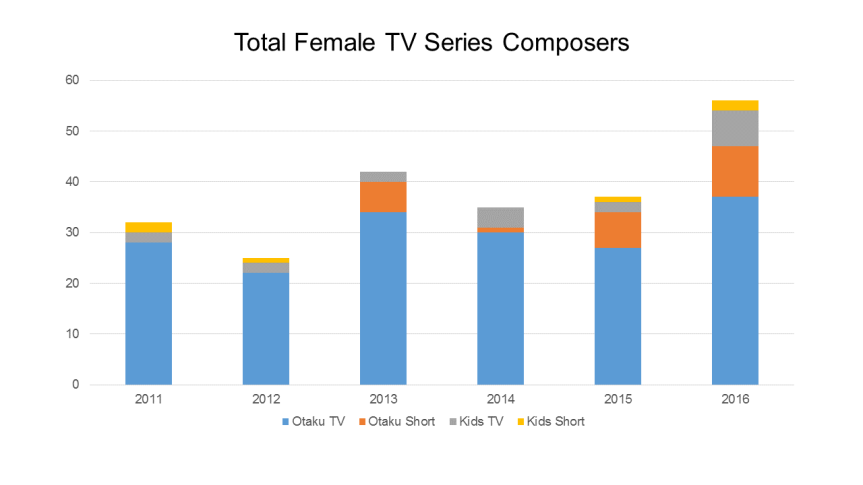 The series composer works with the director to structure the story of an anime. The composer will also write a significant number of episode scripts for the series – though occasionally they will script every episode themselves. Since 2011, the number of projects with female series composers has generally increased, with the bulk coming along with the trend in anime shorts.

END_OF_DOCUMENT_TOKEN_TO_BE_REPLACED

“I believe that everyone has that feeling of wanting to run, when they have all the uneasy feelings from indignation to impatience, to feelings that just don’t make sense.”

Spring 2016 marks the ten-year anniversary of the first episode broadcast of Sasami Magical Girls Club. At around 30 years of age, Sasami is also Mari Okada’s first credit in the role of series composer for a TV anime. Since then, she has been responsible for thirty TV anime series, seven anime movies, a spattering of original OVAs, and many episodes on a variety of TV series – including two where she had an atypical amount of influence. On the way, she won an Animation Kobe award in 2011 for AnoHana. And of course, Okada has much more on the way including Kiznaiver and Mayoiga this Spring. Her works consistently fall into the genre of melodrama, thriving on extravagant emotion, specifically in contrast to a society with a reputation for stoicism. These stylistic and thematic choices have often made her polarizing creator, but has also earned Okada significant popularity among many of her projects The sheer number of original stories created by Okada is also a testament to her chosen styles and the demand for her work from within the anime industry. END_OF_DOCUMENT_TOKEN_TO_BE_REPLACED

Ten years ago on March 11, 2006, Mari Okada made her anime movie debut on a film for the TV anime Kaiketsu Zorori (The full name of the movie is Majime ni Fumajime Kaiketsu Zorori: Nazo no Otakara Daisakusen). In honor of that, here’s part 1 of a two part project on Mari Okada.

In this time line, you can see how her career evolves from simply working on scripts in 1998 to becoming the primary screenwriter and series composer for many TV anime and films beginning in 2006. Included are directors and studios she has worked with on each project, the specific episodes she has penned herself (when available), and screenwriters who have worked under her.

To view in a more convenient Google docs format, click here. More in a month.